7 Things you didn’t know about Hogfish 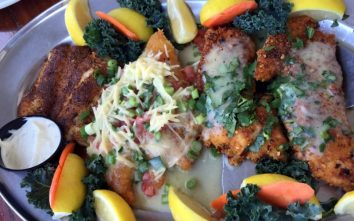 Hogfish is a Florida Keys delicacy, so uniquely and intrinsically tied to the area that unless you have actually visited this part of the world, it is likely you have never even heard of Hogfish before.

However, here in the Keys you will be hard pressed to find a restaurant menu that doesn’t feature this iconic fish. Some chefs feel the Hogfish possess the perfect combination of flavor and texture because they are sweeter than Grouper, flakier than Mahi and as rich as Scallops. One of Islamorada’s most popular restaurants, Chef Michael’s, even uses the Hogfish as the center of its logo, a way for those traveling via Route 1 to easily spot their dining destination. 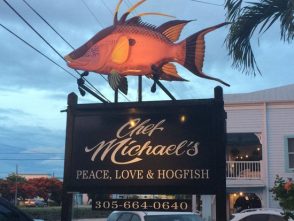 Because the Hogfish is little known to those outside of the Florida Keys community, there may be some interesting facts that visitors (and perhaps even some locals) never knew about this unique breed of fish.

7 Things you didn’t know about Hogfish

1.   The Hogfish uses its elongated pig-like snout to rummage and graze for crustaceans that are buried beneath the sand. The shape of its snout and the way it uses it is what gave the Hogfish its name. 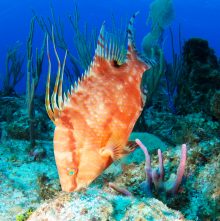 2.   Juvenile Hogfish start out as female and then become male as they mature.

4.   Hogfish social communities are quite interesting, with one male mating with and protecting a group of females.

5.   The common name for Hogfish in Spanish is “doncella de pluma” which literally translates to “feathered maiden”.

6.   Males tend to be more intensely colored than females with a signature black spot behind the pectoral fins. Females are a pale grey or brown with males exhibiting brighter red or orange colors.

7.   Even though they are a part of the wrasse family, Hogfish are closely related to parrot fish.

Hogfish are as beautiful and interesting as they are delicious! See where the Hogfish ranked in our popular feature story “15 Best Tasting Fish in the Florida Keys“. Where is your favorite spot in the Keys to grab a bite of Hogfish?