The following essay was sent to us by a 16 year old boy who learned a valuable lesson from two different Florida Keys fishing experiences. The name of the essay was “Givers and Takers”

While I would not consider myself an avid fisherman, I do enjoy all that is involved with the sport of fishing. Ever since I was young, my father and I have frequented the New Jersey shore to fish the waters of the Atlantic Ocean and the back bays of Avalon, NJ.   Over the years our interest in fishing grew stronger and we decided to do some research and sought out different fishing

locations.  The past two years, we have taken trips to the Florida Keys to pursue the sport more seriously. During our first trip it became clear almost immediately that fishing in Florida Keys was vastly different than the striped bass fishing we had become accustomed to in New Jersey.  The new locations we fished, as well as the species we aimed to catch, were both exotic and exciting.  The entire experience was a game changer, opening my eyes to not only a whole new world of fishing, but also an invaluable life lesson that I will not soon forget.

Every single aspect of our first fishing trip to the Florida Keys was novel for me.  We set out onto the translucent, still water of the flats with our guide, Captain Pete, and I couldn’t help but notice the contrast between these flats and the murky, unsettled back bays I grew up fishing in New Jersey.  Captain Pete knew it was our first time to the Keys and understood that everything would be new to us.  During our hour-long ride from the marina to the fishing grounds, Captain Pete told us about where we would be going, what to expect and what type of species we would be fishing.  This was the first time I’d ever heard of “The Grand Slam”.  Captain Pete explained 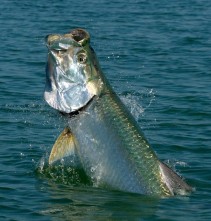 that to achieve the Grand Slam meant to catch the three most elusive fish – the permit, the tarpon, and the bonefish – all in one day.  He told us about some of the people who managed to succeed in catching the Grand Slam and mentioned baseball hall of famer Ted Williams, writer and Key West native Ernest Hemmingway, President Harry Truman, and actor Clint Eastwood, just to name a few.  Because of Captain Pete’s story, catching the Grand Slam remains one of my life long goals.  Before we even got to our destination, my dad and I made a pact to return to the Keys every year in pursuit of the Grand Slam.

When we finally reached our fishing grounds Captain Pete spent the day teaching us what bait to use to catch each fish, where to find each fish and when, and certain techniques to ensure the best chances of landing our catch.  The man was a true expert and an amazingly patient and generous teacher.  Unlike any other fishing we had done to date, the flat fishing relied on the ability to see the fish in the shallow water and the skill to cast the appropriate bait in close proximity to the fish.  Due to our limited skills in this technique we knew we had to rely on a little luck and plenty of direction from the Captain.  We knew from what Captain Pete had told us that only the most experienced fisherman are usually able to hook and catch the elusive fish included in the Grand Slam, and because of this we didn’t expect to have much success. Captain Pete drove us to many different locations, expertly assessing each one and deciding where we 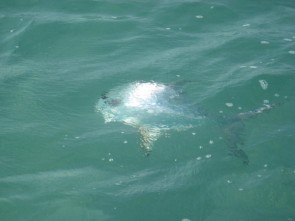 would have the most luck.  We slowed to a stop and casted out into the water.  The serenity and calm we were experiencing in this location was soon interrupted when I felt a tug on my line.  It took some strength and time but when I reeled in my catch and saw it was a permit, one of the three Grand Slam fish, I was ecstatic.  Captain Pete helped us pull the permit up on to the boat and told us it was a good size fish. He then took some time to take pictures of me and my Dad with all the fish we caught.  The pictures from this trip, as well as my catch, the permit, I have mounted to my wall and remain some of my most cherished keepsakes. We had learned so much that even if we didn’t catch any of the Grand Slam fish the experience would have been completely worthwhile.  Catching the permit was better than I could have expected, and I ended the day feeling elated, not wanting to leave, and hungry for more.

A year later we set our sights on another fishing trip to the Florida Keys in pursuit of our Grand Slam goal. Unfortunately, Captain Pete was unavailable due to scheduling and travel time, so we went to the closest marina and hired Captain Mike to guide us in our second Florida Keys fishing excursion. We told Captain Mike a little about the last year’s trip and advised him of our fishing goal. He told us he thought we had a good chance at hooking a few of the species.

The boat ride out to the fishing grounds was quiet, and my Dad and I found ourselves missing the knowledgeable chatter and pleasant conversation that we enjoyed during our ride with Captain Pete. We finally reached our destination and spent three hours of the usual four-hour trip in one location where we did not see so much as one fish.  Captain Mike explained this disappointment away by saying it must have been a slow day.  Much of the success we experienced on our first trip could be attributed to the fishing finesse and wisdom that Captain Pete spent time sharing with us by taking us from location to location in search of the right species.  This was something we noticed that Captain Mike either lacked, or was unwilling to share with us.  It wasn’t until my father suggested that we try another technique or location that Captain Mike moved to a new 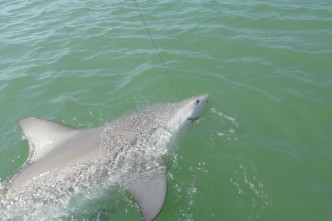 spot or helped us with the equipment. When we moved to my father’s suggested location we caught a six foot black tip shark within the first ten minutes. Since it took about 30 minutes to reel the shark to the boat, our trip was over. We then asked Captain Mike if we could get a picture with our lone catch of the day, he refused explaining that it would be too difficult to bring the shark on board or even to the side of the boat.  I didn’t know it at the time, but without the right guidance, knowledge, and effort from our captain, my goal and high hopes of catching one of the Grand Slam fish on this trip was unachievable from the start.

Despite the disappointment of our second trip, my father and I will stay focused on our goal to catch the Grand Slam, and we will try again next year. From the two experiences I have had fishing in the Florida Keys – one with Captain Pete and one with Captain Mike – I learned something that will stay with me for the rest of my life. In life, there are people that give and 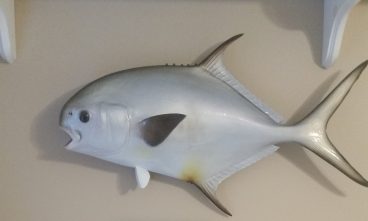 there are people that take.  Captain Pete gave us everything he had – his expertise, wisdom, time, patience, and companionship were all things he generously shared with us.  He was as dedicated to our goal as we were and made the experience one of my most cherished fishing memories of my life. Whenever I see the photos from our trip or look at the permit I have hanging on my wall, it renews my interest in fishing and my determination to accomplish my goal.  Captain Pete is a true giver.

In complete contrast to Captain Pete, Captain Mike was not generous with his time or experience.  It seemed to us that Captain Mike only had interest in making the trip easy and convenient for him so he could do minimal work for the same amount of pay.  He failed to communicate with us, teach us technique, or even go out of his way to take us to a spot where we might be successful.  Because of his laziness I have no tangible memories from my trip with him – no pictures or keepsakes, nothing that inspires me to pursue my goal. Captain Mike is a taker.

The lesson I learned is that in life, there are people who selfishly take from others, from nature, from their community and from society.  They don’t always take possessions or material things, but rather do everything with self-interest and receive the benefits of society without giving anything back. However, there are also people in life that give.  They are generous with their time, knowledge, passion, and advice.  It is very easy to distinguish between these two kinds of people – one strives for the betterment of not only himself, but also those around him, and one acts only with indulgence and indifference towards the people he encounters. One exceeds expectations, and one falls disappointingly short. One focuses on goals he tries to achieve, one does not have goals and therefore, he does not achieve anything. One passes on their light through passion, knowledge and experience, and one stands dimly and idly without making any positive contribution.  One cares, one does not. One will get our business next year, and one will not.  Regardless of what life has in store for me, I have decided one thing indefinitely. I will always be a giver, and never be a taker.