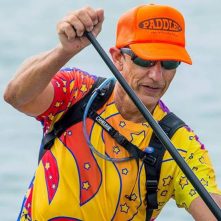 Scott Baste, owner of Paddle The Florida Keys, is no stranger to the water. Scott has been canoeing for over 50 years, starting as a child in Western Pennsylvania and eventually progressing to the Chattooga River in North Georgia. His tenure as an outdoor sports enthusiast spans a variety of different activities including kayaking, scuba, swimming, sailing, white water canoeing and even a stint as a professional mountain bike racer.

Over the summer, Scott took his talents for SUP and competed in the Missouri River 340, a race that challenges all types of paddle craft to travel the length of the state of Missouri along the Missouri River. The race starts in Kansas City and ends (for those who make it) in St. Charles, just outside of St. Louis. Only true paddle enthusiasts take on this race that is lauded as the longest single stage paddle race in the world. The course is a dangerous one. Participants face dangers from the wing dikes (built by the army corps of engineers to accelerate the river flow), UV exposure, nighttime chills, jumping carp, over night barge traffic, and other paddlers.

Local Boy Scout troops serve as volunteers and provide food along the way. Scott’s crew was also instrumental in ensuring he had all the supplies he needed at each checkpoint. The hardest part of the race? Scott recalls paddling through the middle of the first night as a particularly difficult part of the endeavor, with friends calling him on his cell phone throughout the night to keep him company as he paddled.

Completing a race of this magnitude certainly comes with rewards that far outweigh the risk and labor required to compete. 450 watercrafts and over 700 people total entered the race, Scott placed 65th overall and 3rd place in SUP, finishing in 60 hours and 27 minutes. According to Scott, the highlights were passing through towns which he described as “Normal Rockwell picturesque”, the scenery of the Missouri River, meeting paddlers from all over the world (including one from Tokyo, Japan) and of course the incredible sense of accomplishment.

We can only wonder where extreme athletes find the resilience and endurance to take on and finish a feat like the MR340. According to Scott, the old cliché of mind over matter was crucial in making it all happen. 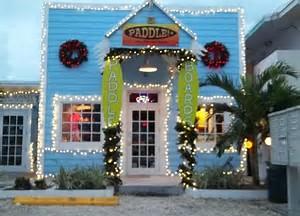 Scott is just as accomplished on land as he is on the water. Just five years ago Scott turned his passion for the outdoors into his top-rated business, Paddle The Florida Keys, which is now a premier watersports company for all things SUP (Stand Up Paddle), eco tours, SUP Yoga, kayak/paddleboard rentals and more. These guys know their stuff. The above story should reassure beginners and experienced paddlers alike that Scott and his team are the experts you’ll want to turn to when planning your next on-the-water excursion. When it comes to paddling, Scott walks the walk – or should we say, paddles the paddle.