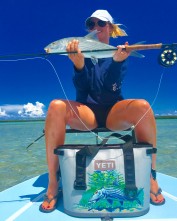 The Florida Keys offer some of the best fishing opportunities in the world. The attraction for Anglers is the diversity available in the species and the methods for catching them. Think Sailfish on the Reef, Tuna at the Humps, Tarpon in the backcountry and Swordfish offshore. The combinations are endless. And maybe one of the most sought after fishing experiences in the Florida Keys is the elusive Bonefish on the Flats.

Bonefish, nicknamed The Gray Ghost, are one of the Florida Keys premier game fish. They are a sleek silvery fish with along snout and dark eyes with great speed and elusiveness. Their average size is between 6 to 8 pounds but can get as large as 15 pounds and normally live to 20 years of age or longer. Bonefish also possess sharp eyesight and strength so odds are they will spot you before you spot them. They are skittish in nature and all these traits add to their ability to elude even the best Anglers. As of 2013 The Florida Fish and Wildlife Conservation Commission had made bonefish a catch and release only species, mainly because of their value to the Florida’s economy. They are one of the most coveted game fish in the world and the Florida Keys is one of the best locations to fish for them. 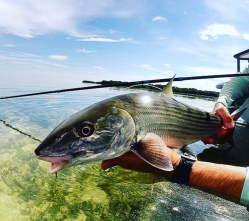 Bonefishing has been around for a long time. Back in the early years of the 1930’s when big game Anglers flocked to the Keys for offshore trophy fish; they began to notice these sleek grey fish on the sand flats on their return trips from the deep. Early big name Anglers like Ernest Hemingway and Zane Grey took the challenge of sight fishing and accurate casting techniques the land these elusive fish on the sand flats around the Florida Keys. Ted Williams, one of the greatest baseball players of all time was one of the best at catching bonefish. What made him a great hitter in baseball also made him a great fisherman, his laser eyesight and great hand/eye coordination.

Unlike other fishing where you head out to sea, throw a bait on a hook, drop it in the water, and wait for the fish to come and bite, bonefishing on the flats is more like hunting. Your experienced guide will quietly pole you on the shallow sand or grassy flats and try to spot the grayish fish cruising or tailing. Once located your guide will call out a time and distance ( Bonefish 10 o’clock 30 feet) which will direct you to the location of the fish. The goal is to cast just beyond the fish and slowing retrieve to present your bait. If all goes well, in an instance, the rod will bend, line will be leaving your spool at an amazing rate and you will feel the speed and power of a bonefish and the reason this species is on every Anglers bucket list. 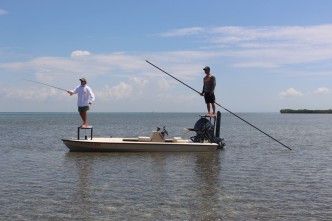 This technique is called sight fishing and is used on several different species that cross the shallow flats. The angler’s ability to locate the bait or fly in close proximity to the fish is the key to landing this stealthy fish. Honing your casting skills (to include in windy conditions) will significantly increase you rate of success.  And don’t forget your polarized sunglasses to assist if spotting the fish.

“Tailing” are bonefish in very shallow water digging into the sandy bottom to locate crustaceans while their tails are above the water providing leverage.  Spotting and catching a tailing bone fish is the pinnacle of the sport. Bonefish like to travel in pairs and you may see them following stingrays to feed off the small uprooted crustaceans they leave in their path.

On those days when the weather is not cooperating and sight fishing would be difficult due to murky waters, high winds, and cloudy skies bonefishing blind is an option that can sometimes produce very good results. Like regular fishing, the key is to have knowledge of their locations and the right rod and bait set up. 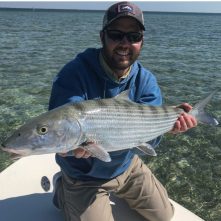 Bonefish, one of four species in the coveted Grand Slam, can be caught year round in the Florida Keys, but the best months are from March through October when the waters are warmer on the flats.  It is best to fish the incoming or outgoing tides when the sun is bright and high in the sky. The larger bonefish are found in the Upper Keys in and around Islamorada and Key Largo. The smaller, but seemingly more abundant, fish are in the lower Keys and Key West.

So C’mon down to Islamorada and the Florida Keys and experience for yourself why Bonefish are one of the world’s most popular game fish.  Email us at info@islamoradatimes.com for recommendations on Fishing Guides, restaurants, places to stay and other attractions while you are in town.