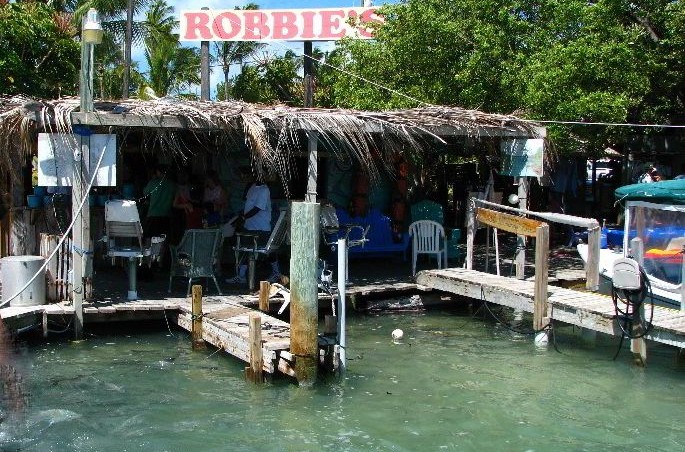 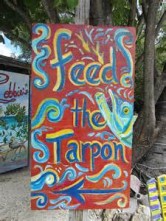 Anyone familiar with Islamorada knows of Robbie’s Marina. Located bayside at Mile Marker 77, Robbie’s Marina is World Famous for “Feeding the Tarpon” If you have not had the chance to experience this spectacle, we highly recommend giving it a try.

It all began three decades ago when an injured tarpon, soon to be named Scarface, meandered into the shallow waters of a small marina. Fearful the tarpon had beached itself, marina owner Robbie went to free it of its future demise. When he was turning the fish loose he noticed his jaw was torn and the fish was in distress.

While many may have just released the fish to deeper waters and let the sharks have their way with him, thankfully for Scarface, Robbie is not like many.  Robbie placed the injured tarpon in one of his oxygenated shrimp tanks and called a doctor friend of his. Try to think of how many doctors would answer a house call for a fish – Scarface was lucky again. Doctor Roach showed up with a mattress and needle and stitched and repaired Scarface’s jaw.

Robbie and his wife Mona then took care of the fish by feeding him daily. Six months later he felt it was time to release the Silver King back into the wild. The fish always stayed close by and Robbie would throw him some bait. Some of Scarface’s friends began to accompany the fish for a free meal as well and this snowballed in to the feeding frenzy and acrobatic jumps that we see daily at Robbie’s Marina. A quick search for “Feeding the Tarpon at Robbie’s” on YouTube and you will see video after video of one of the best show in the Florida Keys. 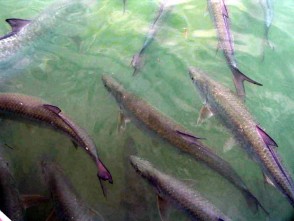 Robbie passed away in 2009, Mona two years earlier. Today his son Michael and wife Annie run the marina. The Tarpon show alone would be enough to visit this attraction, but Robbie’s has so much more to offer. The Hungry Tarpon restaurant has an old Florida Keys flare that salty locals and curious tourists both appreciate. The food is fresh and will please the most eclectic of visitors. A must is the Trailer Trash Bloody Mary. The bar is lined with dollar bills and the Tiki style patio overlooks the bayside for true waterfront dining.

It doesn’t end there – Robbie’s also offers an open air flea market with some great little shops. They have snorkeling tours, eco tours, fishing charters, and boat, paddle board, and kayak rentals available out of the marina.

One of Islamorada’s Gems, come spend some time at Robbie’s and you will not be disappointed.