Many plan a visit to the Florida Keys in the winter months seeking respite from colder weather up north; but avid anglers know that this is also the best time of year to visit if you’re looking to catch sailfish. As water temperatures change, the bait the sailfish feed on migrates to shallower, warmer water which in turn also changes the migration path of the sailfish. 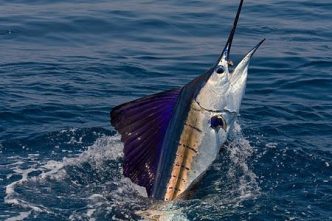 Sailfish are the fastest marine predator in the ocean reaching speeds of up to 68mph. Maximum length for a sailfish is 10 feet, and average length is about 6 feet. Weight ranges from 100 to 220 lbs.  They use their explosive speed to circle and capture their prey. According to many fishermen, sailfish are also one of the most enjoyable species to fish for because they are extremely acrobatic. Once you’ve hooked a sailfish, you’re in for quite a fight, and a show as well! As soon as they feel the hook, they will leap out of the water in an attempt to break free which adds a ton of excitement to your catch. 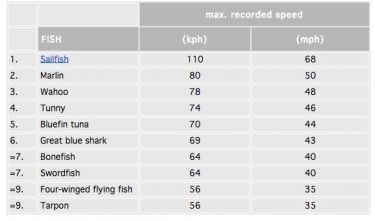 There are many different techniques used to catch sailfish. Sight fishing is a popular method – once you spot a sailfish on the surface of the water you cast live bait out. Kite fishing is another way some fishermen find success in hooking a sailfish. There are plenty of Islamorada Fishing Captains who have experience in catching sailfish specifically. We recommend chartering with one of these experts who can help you determine the best method and location for catching sailfish, as their patterns change daily.

Islamorada is considered the sport fishing capital of the world, and catching a game fish like this one will give you that true experience of being a sport fisherman. With sailfish it’s all about the hunt and the fight because they are always a catch and release species, so be sure to snag a picture from the boat before setting your fish free. Releasing a sailfish is tricky work for novice anglers so this is another area where the expertise of a Captain may come in handy.

With the right guidance, attention to weather and migration patterns, and a little bit of patience and luck, anyone can make this prize catch in the waters of Islamorada. Famed Florida Keys resident, author and angler, Ernest Hemingway, can be seen photographed with his prized sailfish catch off Key West in 1940. Want your shot at catching a sailfish of your own? Now is the time of year to get out and give this awesome sport fishing experience your best shot!