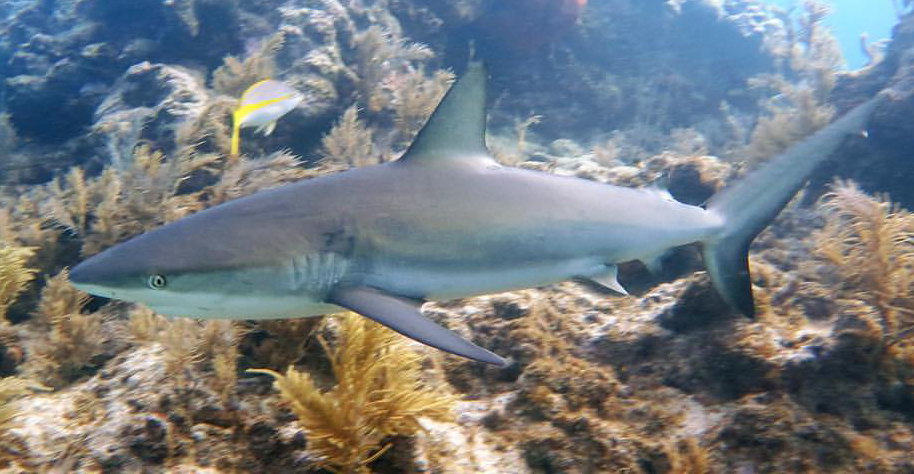 Sharks in the Florida Keys

Are there Sharks in the Florida Keys? You bet.

While the Florida Keys is more known for Sport fishing than it is for shark encounters, you can guarantee that more than a few species of sharks call the teeming waters of the Florida Keys their home. Many factors like the reefs, flats, water temperatures, and abundance of prey make these islands the perfect habitat for many types of sharks. But there’s no need to be afraid! Outside of a few wild YouTube clips, crazy or dangerous shark encounters are not common in the Keys as most of the sharks that reside here are docile. That being said, it is good to know what types of sharks you may see while you’re out fishing or snorkeling and how to observe and, if needed, handle sharks safely. Here are some of the most common species of sharks that inhabit the waters surrounding the Florida Keys: 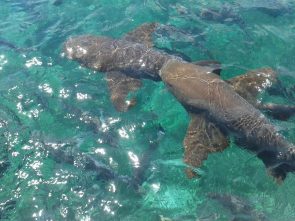 It is common to catch nurse sharks while fishing on the flats. These bottom dwellers are generally docile and will only act defensively if provoked, so if you see one out snorkeling or diving there is no need for alarm as long as you do not disturb it. Nurse sharks can grow up to almost 10 ft long and can weigh hundreds of pounds, making it a decent catch to reel in if you happen to hook one. While most fish, including sharks, need to keep moving for survival, nurse sharks can remain motionless on the ocean’s bottom pointed against the water flow allowing water to still pass over its gills.

Lemon sharks get their name from their pale yellow coloring and are one of the species that is most abundant in the Florida Keys, as these are their native waters. They prefer shallow waters and are often seen on the flats, reefs, and even venturing into fresh waters at times. Lemon sharks can be big, up to 500lbs, but are naturally somewhat docile. These are a good species to catch on a fly while out on the flats. 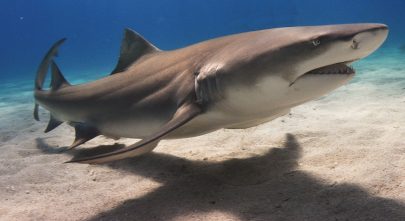 Blacktip sharks have distinctive black markings on the tips of their fins making them very easy to recognize, especially in one of their preferred habitats, the shallow waters of the Florida Keys. They can grow up to 8 feet in length and close to 200 lbs. They like to thrust themselves from below to feed on bait fish located on the surface, and many times you will see them breach the surface and jump several feet in the air. Because they like the warm shallow waters, they do come in close encounters with humans, but they rarely attack without being provoked. 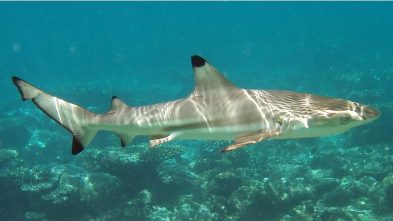 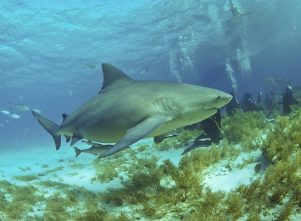 Bull sharks are rare in that they can survive easily in both fresh and salt water. In fact, while most sharks blood salt concentrate equals that to the water they swim in, the bull shark blood salt concentrate level in only 50%. Other shark species can survive in fresh water as well, but the bull shark does it better than most shark species. They have been seen and caught thousands of miles up fresh water rivers and have even called fresh water lakes home for awhile. The bull shark is one of the most dangerous shark to humans because of their aggressive behavior, and it’s a shark species that will attack unprovoked. 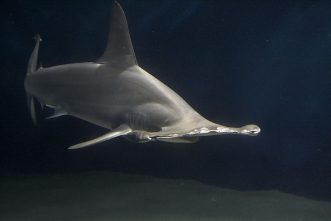 It is obvious how this shark got its name; the distinctive shape of its head is flat and lateral in form. Some argue this head shape was an evolution over time to assist the shark with better vision, since the eyes are located on each side of the hammer, and gives the shark a 360 degree view is spotting prey. They inhabit the reefs and shallow waters of the Florida Keys. The smallest member of the Hammerhead family is the Bonnethead Shark, which predominately can be found on the flats around the Keys. They are much smaller and lack the superior vision of the larger Hammerhead Shark. Hammerhead sharks love to feed on tarpon and they patrol the bridge areas during popular tarpon migration periods. He is an amazing video of a huge hammerhead chasing a tarpon where the tarpon actually jumped onto a boat to escape.

Spinner sharks are hard to miss – while other species of shark do breach the surface while feeding on prey, spinner sharks do it while spinning and rotating its body like a top. This tactic is unusual for sharks which makes this species easy to pick out. They swim through schools of fish rapidly spinning and biting at the scattering fish as they leap out of the water. You’ll know it’s a spinner when you see one! They will also perform these acrobatic movements when hooked by a fisherman. They are strong fighters and very hard to land after being hooked. If you get a chance go on you tube and see the spinner shark in action. 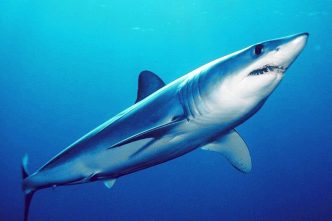 Mako sharks are the fastest sharks on the planet, with speeds of 20mph and burst of speeds that can reach 40mph. Mako sharks are probably known to be the nastiest and most temperamental species of sharks that live in the Keys. They do not take kindly to being caught and will put up a good fight, sometimes leaping up to 20 feet in the air which can sometimes put them in very close proximity to boats and the people on board. Fishing for mako is not for the novice fisherman as it takes some perseverance and knowledge to reel one of these sharks in. They are mostly an offshore sharks, which makes them less of a threat to humans. 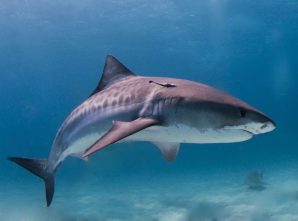 Tiger sharks are one of the biggest and most predatory species on the list. Tiger sharks can get reach a size of 24 feet and 1400 lbs, and only the whale shark, basking shark and great white shark are larger in size. They enjoy a variety of prey such as turtles, birds, squid, dolphins, fish of all kinds and even whales. They have an enormous appetite and basically will eat anything in its path, to include license plates, trash bags or any other junk in the water. They are not fast and will rarely chase their prey. Tiger sharks have been spotted and caught in the Florida Keys, and although they will rarely attack snorkelers or divers, they should not be provoked or tested as they have a tendency to be aggressive and are a powerful species. 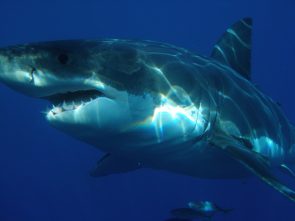 You may have seen reports as recent as this past spring of 2019 that there were Great White shark sightings in the Keys. It’s true! While the movie Jaws took place in New York and Long Island is a natural location for Great Whites to birth their pups, this species is known to travel to various coastlines as they migrate. They don’t inhabit the Keys often but will certainly pass through from time to time raising the alarms of locals as they are spotted by fishermen offshore. Remember those couple of crazy YouTube clips we mentioned in the beginning? This recent footage of a Great White approaching a boat off of Summerland Key is what we were talking about.