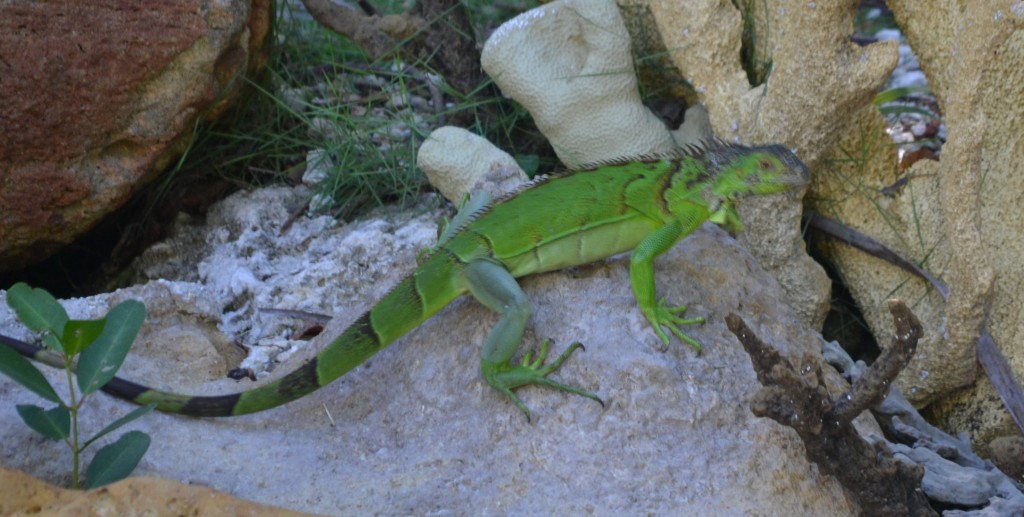 The Green Iguana numbers is the Florida Keys continue to increase. A cold spell back in 2010 killed off a large number of iguanas. Temperatures dropped into the 30’s and the locals tell the story of hearing thud sounds of iguanas dropping dead out of trees. But the resilient iguanas have rebounded and have made a substantial comeback. Non-native to Florida or the Florida Keys, they were brought here as pets, and when they became not so cute or friendly their owners released them into the wild. And they have thrived and multiplied over the years.

First, understand we are discussing the more docile green iguana, and not the aggressive black iguana, which does not have any large presence in the Florida Keys.  They have dark green or orange skin and can grow to six feet in length. They are vegetarians and normally won’t bite or tail whip unless provoked.

The jury seems to be hung as to the presence of these exotic looking creatures. Supporters like them and even feed them on their properties. Some keep them as pets, even though Animal Rights Group and Veterinarians do not recommend iguanas as good pets.  They need special conditions to survive such as heat, light and plenty of space. It can take years to tame them, and they have teeth and long nails that can cause harm to people. Because of their pre historic features, Tourist and locals alike take photos of the Green Iguanas and post them all over social media.

Detractors see the green iguana as a nuisance. They consume residents flower beds, gardens and fruit trees. They have a particular liking for the hibiscus and bougainvillea plants. They also have the tendency to defecate in and around water, so some pool owning residence deal with this mess on a daily basis. Resorts throughout Florida routinely have to hire Iguana hunters to remove the reptiles since they are unwanted and scare the guest.

The Florida Park Service is not fond of the dragon like creature either. The iguanas are non- native to Florida, claiming the consume vegetation that is here for native species. Because they are non-native, they are not protected, which means you can hunt and kill iguanas. But activist are asking that disposal be done as humanely as possible.

One solution to their growing numbers is to hunt the iguanas and to feed the iguana meat to the homeless. They say the meat is very tasty, mostly due to their vegetation diet. With no real predator and their numbers increasing, it looks like the iguanas are here to stay.