The Portuguese Man of War

The Portuguese Man of War is popular this time of year in the waters surrounding the Florida Keys. They are easily identified by the gas filled blue bladder that floats on the water’s surface and sometimes wash up on our beaches. They are very unique creatures, as most of us think they are a jellyfish, but they are actually totally different and made up from other organisms called zooids. Here is what you need to know.

The Man of War lives mostly is tropical waters and float on the surface of these ocean and back bays. They have no propulsion system and move from place to place only by on the wind, tides and water currents. This is the main reason you will see them driven into back channels and the bay waters surrounding the Florida Keys, and the reason they so often wash up on beaches.

The above surface bladder is small and can be up to a foot long in size with its purpose to act as a flotation device and a sail for the organism below. The bladder can also deflate when attacked allowing it to sink below water level. The below water tentacles on average are about 30 feet long, but some have been

measured as long as 150 feet, given the Man of War a large area to lure and capture its prey.

The venomous tentacles of the Man of War are used to paralyze and kill fish and other prey. These tentacles can sting even while detached from the bladder or separated and washed ashore. The Man of War’s sting is extremely painful to humans and leaves a whip like lacerations and welts on the surface of the skin. Rarely does the sting cause human death, but the venomous sting to humans last up to 3 days with the main sting subsiding after 3 hours. Other symptoms of the man of war sting include allergic reaction that causes airways to swell and make breathing difficult, high fever, and shock. It is best to stay clear of this venomous creature.

To treat a Man of War sting it is recommended that the area been flushed with warm salt water immediately and then a mixture of ammonia and water. Vinegar was a popular flush for the sting, but now some doctors believe it aids in the spread of the venom. Medical attention should be considered if other symptoms worsen. Hot packs are also helpful when applied to the affected areas.

The Man of war is a carnivore and uses it large tentacles to capture and kill small fish, and shrimp. It also feeds on plankton and other smaller organism. 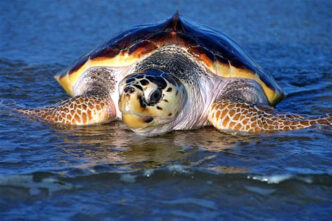 The Portuguese Man of War is an amazing and colorful organism and should only be enjoyed and viewed from a distance. It is important to know their ability to sting even after death or from separated tentacles. So be careful with younger adults and pet’s running freely on the beaches this time of year and stay very clear if one is encountered while swimming in our tropical waters.