Theater of the Sea 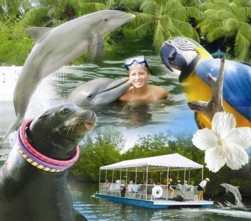 Theater of the Sea is located halfway down the Florida Keys in Islamorada, Florida and is the second oldest marine mammal center in the world. Visitors enjoy a comfortable and clean place to experience marine exhibits and live animal shows. 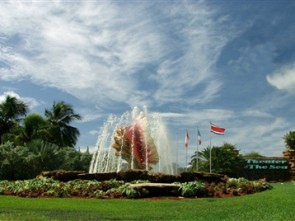 Theater of the Sea’s Giant Conch

Back in the early 1940’s, P.F.”Bud” McKenna, on a recommendation of a friend, visited a quarry on the Overseas Highway which was filled with sea water and colorful parrot fish. Being an enthusiast of fishing and marine life, Bud immediately envisioned a place where tourists could visit and experience the same love for the sea that he and his wife Martha passionately shared.

They packed their bags and moved to Tavernier later in 1941 to begin work on the project. But like most visionaries, there were several obstacles to overcome. First was World War II which forced them out of the Florida Keys and back to the Florida Mainland. At the end of the war, McKenna returned to Tavernier and worked diligently until the Theater opened in 1946.

Dolphins named Jeanie and Buttons were the stars of the show back then, with Jeannie specializing in tricks with toys and Buttons showing of his athleticism with acrobatic leaps from the water. A boat propelled by dolphins was added and was touted as a conservative way to travel. The show and exhibits became so popular that many celebrities including Presidents Eisenhower and Truman visited Theater of the Sea. 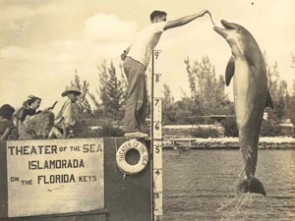 Hurricane Donna took its toll on the park in September of 1960. A storm surge of over 13 feet destroyed the park and displaced most of the animals. McKenna turned devastation into opportunity and vowed to create an even better park. They expanded the animal habitats into several different areas and created the largest natural habitat for dolphins in the world, which still exist today.

The fall of 1962 brought on the anxiety of the Cuban Missile Crisis which had a huge economical impact to the park. The panic had prevented tourist from visiting the Florida Keys, but once the crisis was over tourism rebounded and was back to normal by the end of 1962. 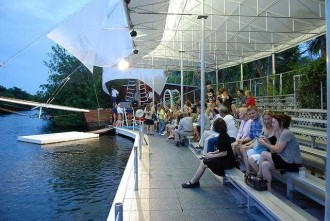 What makes the park so special today is its intimacy with the animals and marine life. Any seat in the house will give you great views of the animals and their many talents. They offer a variety of animal interactive programs to include swimming with dolphins, swimming with sea lions, parrot shows, guided tours, and one of the most popular is the bottomless boat ride. Theater of the Sea’s mission is to provide a wonderful home for these animals while sharing them with visitors in ways that inspire awareness and sensitivity towards animals, the environment, and conservation issues. 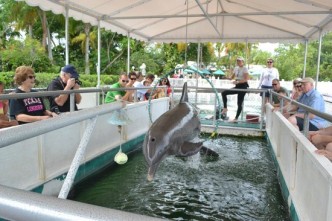 Theater of the Sea’s Bottomless Boat